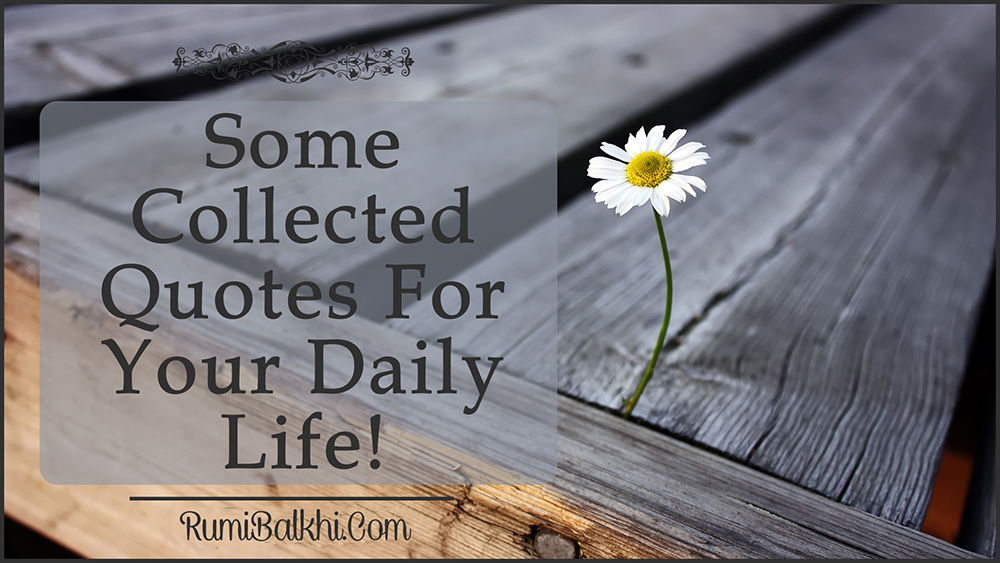 If we all worked on the assumption that what is accepted as true were really true, there would be little hope of advance.
Orville Wright

When I want to read a novel, I write one.
Benjamin Disraeli

If we are facing in the right direction, all we have to do is keep on walking. – Zen Proverb

In the republic of mediocrity, genius is dangerous.
Robert G. Ingersoll

I skate to where the puck is going to be, not where it has been.
Wayne Gretzky

You have enemies? Good. That means you’ve stood up for something, sometime in your life.
Winston Churchill

Play for more than you can afford to
lose and you will learn the game.
Winston Churchill

You must be the change you wish to see in the world.
Mahatma Gandhi

Seek not, my soul the life of the immortals;
but enjoy to the full the resources that are within thy reach.
Pindar

In teaching history, there should be extensive discussion of personalities who benefited mankind through independence of character and judgment.
Albert Einstein

Don’t compromise yourself. You are all you’ve got.
Janis Joplin

There comes a time when one must take a position that is neither safe, nor politic, nor popular, but he must take it because his conscience tells him it is right….
Martin Luther

That which does not kill you makes you stronger.
Neitzsche

It is better to light one candle than to curse the darkness.
Chinese Proverb

We don’t know one-millionth of one percent about anything.
Thomas Edison

Anyone who has never made a mistake has never tried anything new.
Albert Einstein

We always strive after what is forbidden, and desire the things refused us.
Ovid

To be successful you have to be lucky, or a little mad, or very talented, or to find yourself in a rapid growth field.
Edward de Bono

The Athenians, alarmed at the internal decay of their Republic, asked Demosthenes what to do. His reply: “Do not do what you are doing now.”
Joseph Ray

The things you own end up owning you.
Chuck Palahniuk, Fight Club

When one door closes another opens. But often we look so long so regretfully upon the closed door that we fail to see the one that has opened for us.
Helen Keller

There is time for everything.
Thomas A. Edison

I demolish my bridges behind me…then there is no choice but to move forward.
Firdtjof Nansen

Nothing can bring you peace but yourself.
Ralph Waldo Emerson

The worst thing you can try to do is cling to something that is gone, or to recreate it.
Johnette Napolitano

You cannot step twice into the same river, for other waters are continually flowing on.
Heraclitus

Happiness does not depend on outward things, but on the way we see them.
Leo Tolstoy

The art of living lies less in eliminating our troubles than in growing with them.
Bernard M. Baruch

The shortest way to do many things is to do only one thing at a time.
Richard Cech

The first and greatest commandment is, Don’t let them scare you.
Elmer Davis