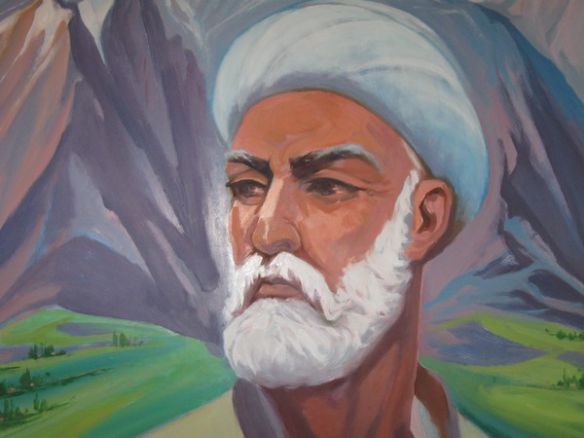 Nasir Khisraw: Story of An Adventurer

NORMAN, Okla. – Although Marco Polo is often considered to be the first traveler to transcribe his journeys into manuscripts around 1300 CE Nasir Khusraw, a famous Persian literary and scientist already recounted his own travel into the Middle East in the Safarnama book 250 years before Polo.

Reza Saberi, a retired teacher had the interesting (and courageous) idea to travel to the same locations as Khusraw did almost a 1,000 years ago in the purpose to confirm Khusraw’s diary.

“I started to be motivated to travel after reading his poems,” Saberi said.

As Saberi could only travel during his vacation times, it took him seven years to complete Khusraw’s travel.

However, Saberi didn’t travel the 12,000 miles of Khusraw’s original trip, instead using modern transportation. He thought even if technologies and cities changed a lot in 1,000 years people didn’t change and are still the same as described in Khusraw’s book.

“Today there are banks and fast-food such as Burger King in front of the Great Mosque of Mecca,” Saberi said. “Khusraw had to rely only on himself.”

Although most of the visited locations were secure, Saberi said some countries such as Syria and more especially Afghanistan where there is a heavy Taliban influence made the trip more hazardous adding, “I was very lucky.”

Saberi started his trip in 2004 for the 1,000th anniversary of Khusraw’s birth saying, “It is important to me so no one can do the same as I did unless to wait another 1,000 years.”

The period Khusraw lived is often referenced as the Persian Renaissance where science, art, and literature were promoted. At the time when Europe was going through the Middle Ages and religious intolerance, the Middle East was a shining example of tolerance where Jews, Christians, and Muslims cohabitated together.

“There were a lot of other great scientists and philosophers such as Khusraw at this time,” Saberi said, adding Khusraw was often very critical against the believers and their superstitions.

Khusraw’s travel started from his mother land Balkh (Afghanistan) on 1046, after numerous adventures throughout Central Asia, the Mediterranean Coast, Egypt and Arabia he finished his trip to Marv (actual Turkmenistan) on 1052.

Saberi said Khusraw was very curious and described with a lot of detail places and people with whom he interacted.

“He was very accurate and very rational giving to his book an authentic proof of the life in the Middle East of the 11th century,” Saberi said, noting most of Europeans who wrote books on Muslims at this time were exaggerating and erroneous. But, because of the big gap between Khusraw’s book and other Europeans’ books, he wasn’t taken seriously.

In addition, Saberi said the poet also gave his feeling in how he dealt with these numerous situations adding, “The book showed his struggle with other people, which were not every time friendly.”

Besides Safarnama, through his long life (he may have lived up to 100 years old) Khusraw wrote numerous books on poetry, theology, and philosophy in Persian and Arabic which are still read today in Afghanistan, Iran, Tajikistan and other neighboring countries.

“Kindle the candle of intellect in your heart and hasten with it to the world of brightness,” Nasir-i Khusraw, March 5, 1046.