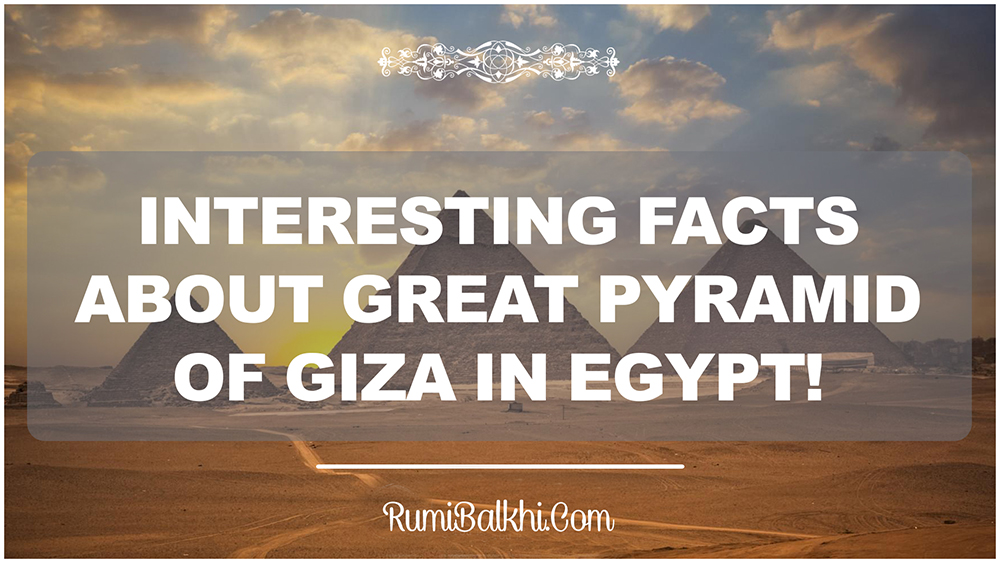 This pyramid is the largest of all three pyramids that border El Giza, Egypt and it is also the largest pyramid ever built.

The pyramid was built with about 2.3 million stone blocks and it is thought to weigh 5.9 million tonnes.

The ancient name of the Great Pyramid of Giza was Khufu’s Horizon.

This pyramid is the only one in Egypt known to have passages inside that go up and go down. If you wanted to visit the king’s chamber you would have to walk down, all the way, bent over.

The Great Pyramid of Giza once had a swivel door at the entrance. It weighed about 20 tonnes and could easily be pushed open from the inside. On the outside it was very hard to find because it fit perfectly. There are only two other pyramids known to have had swivel doors. One was Khufu’s father’s pyramid and the other was his grandfather’s pyramid.

There has been no writing or hieroglyphics found inside the Great Pyramid of Giza.

This pyramid is the only one to have been built with concave sides. This means that all four side curve in slightly.

If we tried to build an exact replica of this pyramid it would not be possible. We do not have the precise technology that the ancient Egyptians had that was necessary to build this pyramid.

There were three burial chambers inside. One of the chambers was built into the bedrock underground. The queen’s chamber was higher and the king’s chamber was the highest.

Khufu didn’t intend to use the queen’s chamber for any of his wives. It is thought that he intended to use it for a statue of himself.