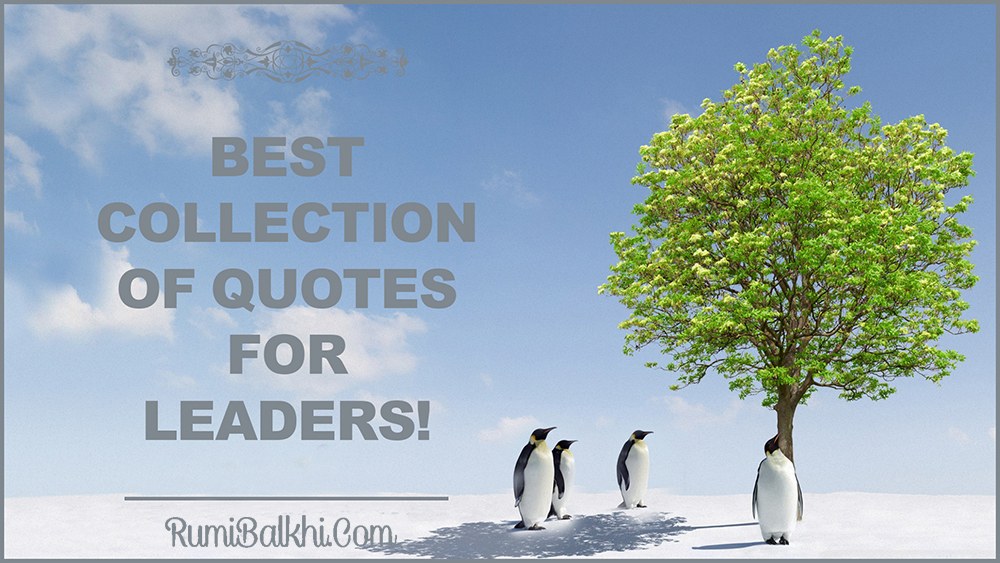 Do not follow where the path may lead. Go instead where there is no path and leave a trail.
Harold R. McAlindon
(also attributed to Emerson and others)

Not the cry, but the flight of a wild duck, leads the flock to fly and follow. – Chinese Proverb

Leadership: The art of getting someone else to do something you want done because he wants to do it.
Dwight D. Eisenhower

There go the people.
I must follow them for I am their leader.
Alexandre Ledru-Rollin

What chance gathers she easily scatters. A great person attracts great people and knows how to hold them together.
Johann Wolfgang Von Goethe

A general is just as good or just as bad as the troops under his command make him.
General Douglas MacArthur

Learn to see things backwards, inside out, and upside down.
John Heider, Tao of Leadership

Men are governed only by serving them; the rule is without exception.
V. Cousin

The real leader has no need to lead–
he is content to point the way.
Henry Miller

Be known for pleasing others, espcecially if you govern them…Ruling others has one advantage: you can do more good than anyone else.
Baltasar Gracián

Go to the people. Learn from them. Live with them. Start with what they know. Build with what they have. The best of leaders when the job is done, when the task is accomplished, the people will say we have done it ourselves.
Lao Tzu

A leader is a dealer in hope.
Napoleon Bonaparte

Rely on your own strength of body and soul. Take for your star self-reliance, faith, honesty and industry. Don’t take too much advice — keep at the helm and steer your own ship, and remember that the great art of commanding is to take a fair share of the work. Fire above the mark you intend to hit. Energy, invincible determination with the right motive, are the levers that move the world.
Noah Porter

There is always room for a man of force and he makes room for many. Society is a troop of thinkers and the best heads among them take the best places.
Ralph Waldo Emerson

If your actions inspire others to dream more, learn more, do more and become more, you are a leader.
John Quincy Adams

Be willing to make decisions. That’s the most important quality in a good leader.
George S. Patton

The art of leadership is saying no, not yes. It is very easy to say yes.
Tony Blair

The people follow the example of those above them.
Chinese Proverb

He who has never learned to obey
cannot be a good commander.
Aristotle

Any one can hold the helm when the sea is calm.
Publilius Syrus

Never tell people how to do things. Tell them what to do and they will surprise you with their ingenuity.
George Patton

Where there is no vision, the people perish.
Proverbs 29:18

Misfortunes, untoward events, lay open, disclose the skill of a general, while success conceals his weakness, his weak points.
Horace

In this world a man must either be an anvil or hammer.
Henry W. Longfellow

Leadership does not always wear the harness of compromise.
Woodrow Wilson

The greater a man is in power above others, the more he ought to excel them in virtue. None ought to govern who is not better than the governed.
Publilius Syrus

Take time to deliberate; but when the time for action arrives, stop thinking and go in.
Andrew Jackson

A bold onset is half the battle.
Giuseppe Garibaldi

The power is detested, and miserable the life, of him who wishes to be feared rather than to be loved.
Cornelius Nepos

To be a great leader and so always master of the situation, one must of necessity have been a great thinker in action. An eagle was never yet hatched from a goose’s egg.
James Thomas

Ill can he rule the great that cannot reach the small.
Edmund Spenser

He who has learned how to obey will know how to command.
Solon

When I give a minister an order, I leave it to him to find the means to carry it out.
Napoleon Bonaparte

No man can stand on top because he is put there.
H. H. Vreeland

A ruler should be slow to punish and swift to reward.
Ovid

It is impossible to imagine anything which better becomes a ruler than mercy.
Seneca

No man is good enough to govern another man without that other’s consent.
Abraham Lincoln

What you cannot enforce /
Do not command.
Sophocles

No general can fight his battles alone. He must depend upon his lieutenants, and his success depends upon his ability to select the right man for the right place.
Philip Armour

It is absurd that a man should rule others, who cannot rule himself. (Absurdum est ut alios regat, qui seipsum regere nescit.)
Latin Proverb

A good general not only sees the way to victory; he also knows when victory is impossible.
Polybius