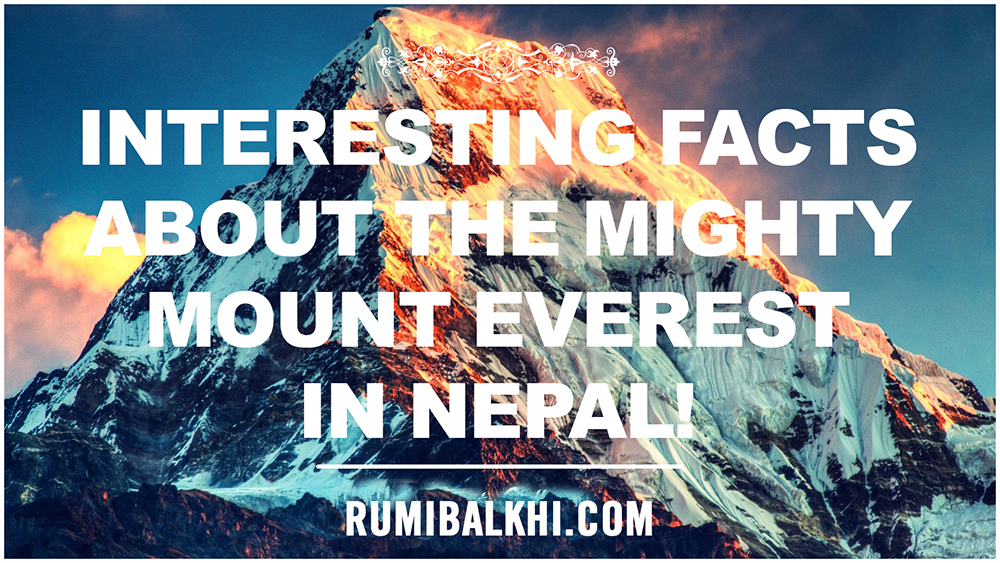 The tallest mountain on land in our world is part of the Himalayan Alps and called Mount Everest. The local Tibetan people, called Sherpa, call it “Chomolungma” which means “Mother Goddess of the Universe” and in Nepal, it is called “Sagarmatha” which means “Goddess of the Sky”. Mt. Everest is located in the mountain range bordering the countries of Nepal and Tibet.

Interesting Mount Everest Facts:
This mountain is about 60 million years old and 29, 035 feet (8848 meters) tall. It grows about 1 inch every 4 years. This is because the rock upon which it sits is moving northwards pushing into the rocks of the European continent.

The weather conditions around the mountain are very cold and windy.

Mt. Everest is always covered in snow and ice. Many successful climbs to the summit happen in May. This is because the weather conditions are more favorable.

The air surrounding the top of the mountain is very thin. Human explorers, called mountaineers, must take their own air supply with them in Oxygen tanks so that they can continue to breathe properly as they climb up the steep slopes.

It takes 2 months for the human body to adapt to climbing Mt. Everest because of the air getting so thin with increasing altitude (height).

There are several camps up the mountain and mountaineers trek to one camp and then when ready and adapted to the altitude, they move on to the next one up the mountain.

The first humans to ever reach the summit (top) on the southern side of the mountain were Sir Edmund Hilary, a mountaineer from New Zealand and his guide, a local Nepalese man called Tenzing Norgay. They made it to the summit on May 29, 1953.

The summit was first climbed on the northern side by a Tibetan man, Nawang Gombu and Chinese mountaineers, Chu Yin-Hau and Wang Fu-zhou in May 25, 1960.

The oldest person to make it to the summit was a Nepalese man, Min Bahadur Sherchan, aged 76 years old on May 26, 2008.

The first person to travel alone to the summit was an Italian man, Reinhold Messner who climbed the North Face in August 20, 1980.

The first woman to make it to the summit was Japanese woman, Junko Tabei, in May 16, 1975. She climbed the southern face of the mountain.

While over 4,000 people have attempted to climb Mt. Everest, only 660 people have been successful and 142 people have died trying and 120 are still buried on the mountain. The usual cause of death is being buried by an avalanche where millions of tons of snow fall down off the mountain slope.

Mountaineers climbing the mountain risk becoming ill and dying through hyperthermia (becoming too cold) and altitude sickness caused by a lack of Oxygen in the air.

The Oxygen content at the summit is only 30% of the air that it is at sea level making it very difficult to breathe.

Mountaineers can also suffer from snow-blindness and frostbite. When the weather is extremely cold the blood circulation to peoples’ fingers and toes can stop, damaging fingers and toes so badly they have to be cut off.

Water boils (turning from a liquid to a gas) at 212oF (100oC) at sea level but on Mt. Everest it can boil at lower temperatures such as150oF (66oC). This is because the air pressure (the thickness of the air) is a lot less at the top of the mountain than at sea level.