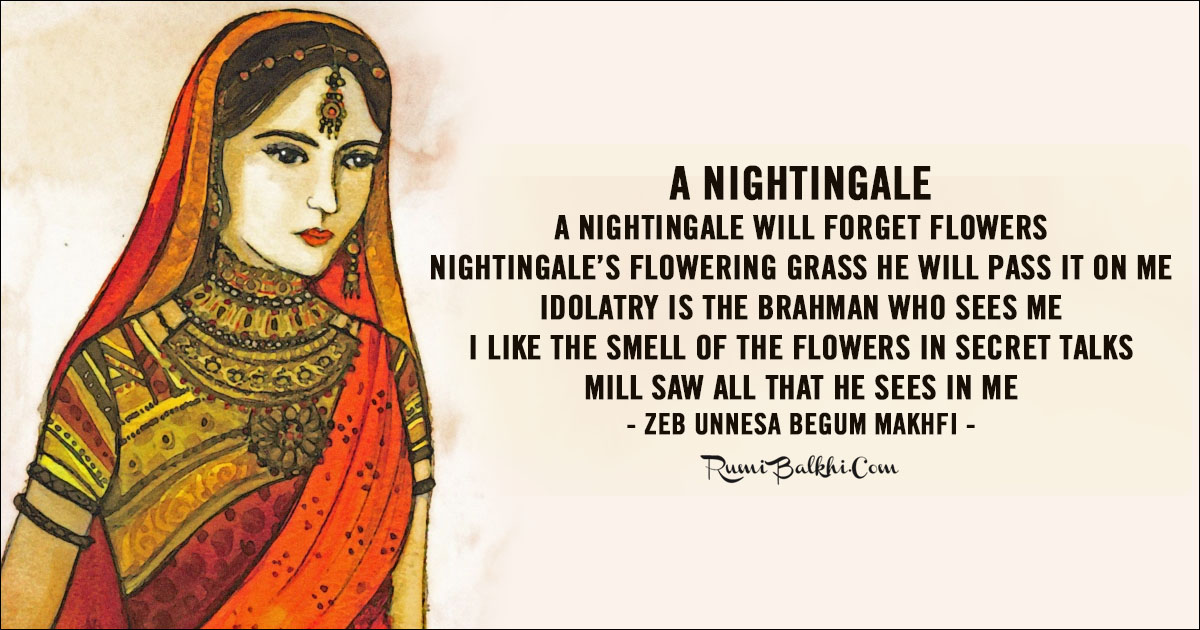 Zeb-un-Nissa (Persian: زیب النساء مخفی‎‎) (15 February 1638 – 26 May 1702) was a Mughal princess and the eldest child of Emperor Aurangzeb (3 November 1618 – 3 March 1707) and his chief consort Dilras Banu Begum. She was also a poet, who wrote under the pseudonym of “Makhfi” (مخفی, “Hidden One”). Imprisoned by her father in the last 20 years of her life at Salimgarh Fort, Delhi, Princess Zeb-un-Nissa is remembered as a poet, and her writings were collected posthumously as Diwan-i-Makhfi.

Birth:
Zeb-un-Nissa (“Ornament of Womankind”), the eldest child of Prince Muhi-ud-Din (the future emperor Aurangzeb), was born on 15 February 1638 in Daulatabad, Deccan, exactly nine months after the marriage of her parents. Her mother, Dilras Banu Begum, was Aurangzeb’s first wife and chief consort, and was a princess of the prominent Safavid dynasty; the ruling dynasty of Iran (Persia). Zeb-un-Nissa was her father’s favorite daughter, and because of this she could compel him to pardon people who had offended him.

Education and accomplishments:
Her father charged Hafiza Mariam, one of the women of the court, with the education of Zeb-un-Nissa. She seems to have inherited her father’s keenness of intellect and literary tastes because Zeb-un-Nissa memorized the Quran in three years and became a Hafiz at age seven. This occasion was celebrated by her father with a great feast and public holiday. The princess was also given a reward of 30,000 gold pieces by her delighted father. Aurangzeb paid the princely sum of 30,000 gold pieces to the ustad bi for having taught his cherished daughter well.

Zeb-un-Nissa then learned the sciences of the time with Mohammad Saeed Ashraf Mazandarani, who was also a great Persian poet. She learned philosophy, mathematics, astronomy, literature, and was a mistress of Persian, Arabic and Urdu. She had a good reputation in calligraphy as well.

Her library surpassed all other private collections, and she employed many scholars on liberal salaries to produce literary works at her bidding or to copy manuscripts for her. Zeb-un-Nissa’s library was inspired by Emperor Akbar’s collection, which had the Qur’an, Hindu and Jain scriptures, Greek Mythology, Persian texts, travel accounts of the scholarly Alberuni, translations of the Bible and contemporary writing about her ancestors. Her library also provided literary works on each subject, such as law, literature, history and theology.

Zeb-un-Nissa was a kind-hearted person and always helped people in need. She helped widows and orphans. Not only did she help people but every year she sent Hajj pilgrims to Mecca and Medina. She also took an interest in music and it was said that she was the best singer among the women of her time. She was also skilled in the use of arms and several times took part in war.

Zeb-un-Nissa started to narrate poems in Persian from the age of 14, but as her father did not like poetry, she used to write secretly. Ustad Bayaz, one of her teachers, found her poems and encouraged her to continue narrating them. It is reported that in the court of Aurangzeb, there used to be hidden literary and poetic parties among “great” poets like Ghani Kashmiri, Naimatullah Khan and Aqil Khan Razi, and Zeb-un-Nissa participated secretly in these parties.

LIFE AFTER AURANGZEB’S ACCESSION:
When Aurangzeb became the emperor after Shah Jahan, Zeb-un-Nissa was 21 years old. Aurangzeb found out about the talent and capacity of his daughter and began to discuss the political affairs of his Empire with her, listening to her opinions. It has been mentioned in some books that Aurangzeb sent all the royal princes for the reception of Zeb-un-Nisa each time she entered the court. Zeb-un-Nissa had four other younger sisters: Zeenat-un-Nissa, Zubdat-un-Nissa, Badr-un-Nissa and Mehr-un-Nissa.

Regarding her looks, “… she is described as being tall and slim, her face round and fair in colour, with two moles, or beauty-spots, on her left cheek. Her eyes and abundant hair were very black, and she had thin lips and small teeth. In Lahore Museum is a contemporary portrait, which corresponds to this description… In dress she was simple and austere; in later life she always wore white, and her only ornament was a string of pearls round her neck.” Also with the way she dressed comes about her making an invention.” Zeb-un-Nissa invented a woman garment known as Angya Kurti. This was a modified form of the dress of the women of Turkestan. The modification was done to suit Indian conditions”.

Zeb-un-Nissa lived in a period when many “great” poets were at the peak of their reputation; e.g. Mawlana Abdul Qader Bedil, Kalim Kashani, Saa’eb Tabrizi and Ghani Kashmiri. There is a noticeable influence of Hafez Sherazi’s style on the poetry of Zeb-un-Nissa. However, she is considered as one of the poets of the Indian School of Poetry in Persian. “Zebunnisa was trained in the serious study of religious doctrine and in matters in faith, and she was known as an excellent scholar in several academic areas and as a literary figure and parton of some renown. She sang well and composed songs and planted many of the gardens of her day.” Another talent that she had with writing was writing different kinds of Persian hand like nastaliq, mashkh and shikesta beautifully.

Zeb-un-Nissa selected “Makhfi” (which means Hidden One in Persian) as her pen-name in her poetry. In addition to her poetic book or collection of poems, called Diwan, which contains approximately 5,000 verses, she also wrote the following books: Monis-ul-Roh, Zeb-ul Monsha’at and Zeb-ul-Tafasir. In Maghzan-ul Ghara’eb, the author writes that the poetic book of Zeb-un-Nissa contained 15,000 verses. Zeb-un-Nissa encourage complications and translations of various works also. A certain Mulla Safi-un Din Ardlei (Arabeli) under her patronage translated the gigantic Arabic work Tasifer -I-Kabir into Persian and named it Zeb-ut-Tasfir after her.

Later years, imprisonment and death:
There are multiple conflicting accounts offering explanations for the circumstances which ultimately led to her imprisonment at Salimgarh Fort, Delhi, at the edge of Shahjahanabad (present Old Delhi). In 1662, when Aurangzeb was taken ill and his physicians prescribed a change in the environment, he took his family and court with him to Lahore. At that time Akil Khan, the son of his vizier, was Governor of that city. In the following period, Akil Kahn and Zeb-un-Nissa allegedly had a brief yet failed affair, after which Auranzeb began to distrust her and later imprisoned her. Other theories suggest that she was imprisoned for being a poetess and a musician (both anathema to Aurangzeb’s austere, more orthodox and fundamental way of life and thinking). Yet another explanation points to her correspondence with her younger brother, Muhammad Akbar. She supported the young prince in the inevitable ongoing conflict of succession, and was discovered to have written to him during the rebellion in 1681 AD (over the course of which he had publicly accused Aurangzeb of transgressions against Islamic law). Her punishment was to have her accumulated wealth confiscated, her annual pension of 4 lakhs nullified, and she was held prisoner at Salimgarh until her death.

Here after 20 years of imprisonment, Zeb-un-Nissa died after seven days of illness still captive in Shahjahanabad while Aurangzeb was on a trip to the Deccan. Conflicting sources state the date of her death alternately as 1701 AD and 1702 AD. Her tomb was in the garden of “Thirty thousand trees”, outside of the Kabuli Gate, the west gate of the city. But when the railway line was laid out at Delhi, her tomb with its inscribed tombstone was shifted to Akbar’s mausoleum at Sikandra, Agra. There is also a tomb in Nawankot, Lahore, Pakistan, but its authenticity is doubtful.

In 1724, years after her death, her scattered and extant writings were collected under the name Diwan-i-Makhfi, literally, the Book of the Hidden One. It contained four hundred and twenty-one ghazals and several ruba’is. Subsequently, in 1730 other ghazals were added to the manuscript, which was also illuminated.

PERSONAL LIFE:
Zeb-un-Nissa did not get married and remained single her whole life, despite the fact that she had many suitors.This also came with the rise of speculative gossip about secret lovers and palace trysts.

Her grandfather, Emperor Shah Jahan, had betrothed her to her first cousin, Prince Sulaiman Shikoh, the eldest son of her paternal uncle, Crown prince Dara Shikoh. Shah Jahan had intended for her to become a future Mughal empress as Sulaiman was the heir to Dara Shikoh, who was next in line for succession to the Mughal throne after Shah Jahan. The marriage would’ve been a perfect match but did not, however, take place, due to Aurangzeb’s reluctance; who despised his older brother. Zeb-un-Nisa spent all her life on literary works and poetry, as she herself said:

In some books it has been written that there was a secret love affair between Zeb-un-Nissa and Aqil Khan Razi, a poet and the governor of Lahore. However, others disagree with the prior theory. For example, in her poetic book (Diwan), some would argue that one cannot find a single Ghazal which supports this point and that all of her poems are based on the Sufi concept of the Love of God.

According to certain sources, “dehumanizing” scandals (created and/or written by some foreigners) regarding the lives of Mughal ladies were not uncommon (during the post-Renaissance era). For example, a claim of: “A sordid episode of [Zeb-un-Nissa’s] carnal romance with Aqil Khan Razi and his death inside a hot cauldron with burning fire under it, gained wider currency and was eagerly picked up by the… populace.” However, other sources state that Razi lived long (as a government official) and died naturally.

LEGACY:
Her poetic book was printed in Delhi in 1929 and in Tehran in 2001. Its manuscripts are in the National Library of Paris, the Library of the British Museum, the Library of Tübingen University in Germany and in the Mota Library in India. Zeb-un-Nissa loved the gardens in Agra and Delhi and a garden of Zeb-un-Nissa in Lahore is named for her. The garden which she laid out in Lahore itself and which was called the Chauburgi, or four- towered, can still be traced by portions of the walls and gates remaining. Three of the turrets over the archway still stand, ornamented with tiles in patterns of cypress-trees and growing flowers, and the gateways have inscriptions in Arabic and Persian. The Divin-i-Makhfi is widely read in India and is highly esteemed. Its poetry is chanted in the estatic concourses which is meet at festivals at the tombs of celebrated saints.