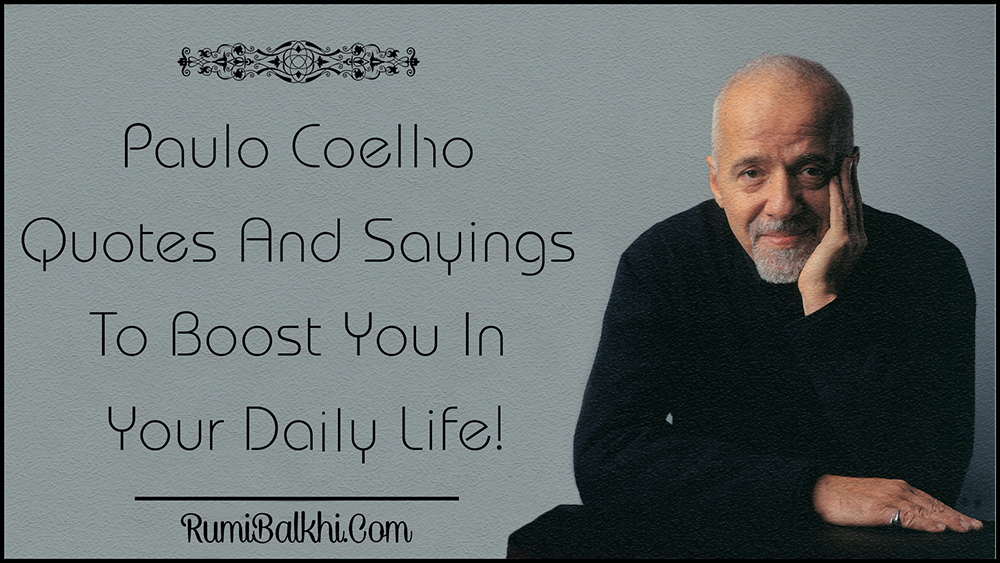 Paulo Coelho de Souza is a Brazilian lyricist and novelist. He is the recipient of numerous international awards, amongst them the Crystal Award by the World Economic Forum. The Alchemist, his most famous novel, has been translated into 80 languages. The author has sold over 200 million copies worldwide and is the all-time bestselling Portuguese language author (Lista de livros mais vendidos).

As a teenager, Coelho wanted to become a writer. Upon telling his mother this, she responded, “My dear, your father is an engineer. He’s a logical, reasonable man with a very clear vision of the world. Do you actually know what it means to be a writer?”

After researching, which was common for him since he was a policy debater when he was in high school, Coelho concluded that a writer “always wears glasses and never combs his hair” and has a “duty and an obligation never to be understood by his own generation,” amongst other things.

At 17, Coelho’s introversion and opposition to following a traditional path led to his parents committing him to a mental institution from which he escaped three times before being released at the age of 20.

Coelho later remarked that “It wasn’t that they wanted to hurt me, but they didn’t know what to do… They did not do that to destroy me, they did that to save me.”

At his parents’ wishes, Coelho enrolled in law school and abandoned his dream of becoming a writer. One year later, he dropped out and lived life as a hippie, traveling through South America, North Africa, Mexico, and Europe.

Upon his return to Brazil, Coelho worked as a songwriter, composing lyrics for Elis Regina, Rita Lee, and Brazilian icon Raul Seixas. Composing with Raul led to Coelho being associated with magic and occultism, due to the content of some songs.

In 1986, Coelho walked the 500-plus mile Road of Santiago de Compostela in northwestern Spain, a turning point in his life. On the path, Coelho had a spiritual awakening, which he described autobiographically in The Pilgrimage.

Writing career: In 1982, Coelho published his first book, Hell Archives, which failed to make a substantial impact. In 1986 he contributed to the Practical Manual of Vampirism, although he later tried to take it off the shelves since he considered it “of bad quality.”

The following year, Coelho wrote The Alchemist and published it through a small Brazilian publishing house who made an initial print run of 900 copies and decided not to reprint.

He subsequently found a bigger publishing house, and with the publication of his next book Brida, The Alchemist took off. HarperCollins, the biggest publishing House in the United States, decided to publish the book in 1994. Then, it became first a Brazilian bestseller, later a world-wide phenomenon.

The Alchemist has gone on to sell more than 83 million copies, becoming one of the best-selling books in history, and has been translated into 67 different languages, winning the Guinness World Record for most translated book by a living author.

The Alchemist, easily known as his most successful book, is a story about a young shepherd who travels from his homeland in Spain to the Egyptian desert in search of a treasure buried in the Pyramids. No one knows what the treasure is, or if Santiago will be able to surmount the obstacles along the way. But what starts out as a journey to find worldly goods turns into a discovery of the treasure found within. The book has inspired a devoted following around the world, with Will Smith, Madonna, and others having declared it to be their favorite novel, and Bill Clinton having been seen with a copy of the book. In 2014, Oprah Winfrey interviewed pop star Pharrell Williams, who stated that The Alchemist had changed his life.

Since the publication of The Alchemist, Coelho has generally written one novel every two years including By the River Piedra I Sat Down and Wept, The Fifth Mountain, Veronika Decides to Die, The Devil and Miss Prym, Eleven Minutes, Like the Flowing River, Brida, The Valkyries, The Winner Stands Alone, The Zahir, The Witch of Portobello, Aleph (novel), Manuscript Found in Accra and Adultery. While trying to overcome his procrastination of launching his writing career, Coelho said, “If I see a white feather today, that is a sign that God is giving me that I have to write a new book.” Coelho found a white feather in the window of a shop, and began writing that day.

Social Media: Paulo Coelho is the writer with the largest community online. As for October 2015, the author has more than 28 million fans only on his Facebook main page and more than 10 million followers on Twitter . He also has accounts on Instagram, Pinterest and Tumblr, among others. He manages his own social communities and has a strong interaction with his readers. Coelho discussed his relationship with readers through social media platforms with The Wall Street Journal in August 2014.

Paulo Coelho Quotes And Sayings To Boost You In Your Daily Life!

It is precisely the possibility of realizing a dream that makes life interesting.

Where there is loyalty, weapons are of no use.

There are moments when troubles enter our lives and we can do nothing to avoid them. But they are there for a reason. Only when we have overcome them will we understand why they were there.

How much I missed, simply because I was afraid of missing it.

There is only one thing that makes a dream impossible to achieve: the fear of failure.

When a person really desires something, all the universe conspires to help that person to realize his dream.

None Of Us Knows What Might Happen Even The Next Minute, Yet Still We Go Forward. Because We Trust. Because We Have Faith.

Freedom Is Not The Absence Of Commitments, But The Ability To Choose – And Commit Myself To – What Is Best For Me.

Love Can Only Be Found Through The Act Of Loving.

Travel Is Never A Matter Of Money, But Of Courage.

People Never Learn Anything By Being Told, They Have To Find Out For Themselves.

Passion Makes A Person Stop Eating, Sleeping, Working, Feeling At Peace. A Lot Of People Are Frightened Because, When It Appears, It Demolishes All The Old Things It Finds In Its Path.

Sadness Does Not Last Forever When We Walk In The Direction Of That Which We Always Desired.

If You’re Brave Enough To Say Goodbye, Life Will Reward You With A New Hello.

A Warrior Of The Light…Never Confuses Tension With Anxiety.

To Each Of Man’s Ages The Lord Gives Its Own Anxieties.

Anyone Who Loves In The Expectation Of Being Loved In Return Is Wasting Their Time.

You Have To Take Risks. We Will Only Understand The Miracle Of Life Fully When We Allow The Unexpected To Happen.

We Can Never Judge The Lives Of Others, Because Each Person Knows Only Their Own Pain And Renunciation. It’s One Thing To Feel That You Are On The Right Path, But It’s Another To Think That Yours Is The Only Path.

What Hurts Us Is What Heals Us.

If You Are Brave Enough To Say Goodbye Life Will Reward You With A New Hello.

Whenever You Want To Achieve Something, Keep Your Eyes Open, Concentrate And Make Sure You Know Exactly What It Is You Want. No One Can Hit Their Target With Their Eyes Closed.

But How Will I Know Who My Soul Mate Is? … By Risking Failure, Disappointment, Disillusion, But Never Ceasing In Your Search For Love. As Long As You Keep Looking, You Will Triumph In The End.

Important Encounters Are Planned By The Souls Long Before The Bodies See Each Other.

Every Blessing Ignored Becomes A Curse.

God Always Offers Us A Second Chance In Life.

Life Always Waits For Some Crisis To Occur Before Revealing Itself At Its Most Brilliant.

It’s A Good Idea Always To Do Something Relaxing Prior To Making An Important Decision In Your Life.

You Have To Take Risks. We Will Only Understand The Miracle Of Life Fully When We Allow The Unexpected To Happen.

The Rose Is A Rose From The Time It Is A Seed To The Time It Dies. Within It, At All Times, It Contains Its Whole Potential. It Seems To Be Constantly In The Process Of Change: Yet At Each State, At Each Moment, It Is Perfectly All Right As It Is.

Age Is A Very High Price To Pay For Maturity.

Do Something Instead Of Killing Time Because Time Is Killing You.

Anyone Who Loves In The Expectation Of Being Loved In Return Is Wasting Their Time.

We Have Lost Contact With Reality, The Simplicity Of Life.

I Believe Enlightenment Or Revelation Comes In Daily Life. I Look For Joy, The Peace Of Action. You Need Action. I’d Have Stopped Writing Years Ago If It Were For The Money.

I Want To Continue Being Crazy; Living My Life The Way I Dream It, And Not The Way The Other People Want It To Be.

Intuition Is Really A Sudden Immersion Of The Soul Into The Universal Current Of Life.

You Can Become Blind By Seeing Each Day As A Similar One. Each Day Is A Different One, Each Day Brings A Miracle Of Its Own. It’s Just A Matter Of Paying Attention To This Miracle.

It is precisely the possibility of realizing a dream that makes life interesting.

It’s the possibility of having a dream come true that makes life interesting.

I’ve learned that waiting is the most difficult bit, and I want to get used to the feeling, knowing that you’re with me, even when you’re not by my side.

If I am really a part of your dream, you’ll come back one day.

It’s the simple things in life that are the most extraordinary.

If You’re Brave Enough To Say Goodbye, Life Will Reward You With A New Hello.

Tell Your Heart That The Fear Of Suffering Is Worse Than The Suffering Itself. And No Heart Has Ever Suffered When It Goes In Search Of Its Dream.

If You Want To See A Rainbow You Have To Learn To See The Rain.

Even If Loving Meant Leaving, Or Solitude, Or Sorrow, Love Was Worth Every Penny Of Its Price.

Close Some Doors. Not Because Of Pride, Incapacity Or Arrogance, But Simply Because They No Longer Lead Somewhere.

Where There Is Loyalty, Weapons Are Of No Use.

Men Dream More About Coming Home Than About Leaving.

A Warrior Of Light Who Trusts Too Much In His Intelligence Will End Up Underestimating The Power Of His Opponent.

You Drown Not By Falling Into A River, But By Staying Submerged In It.