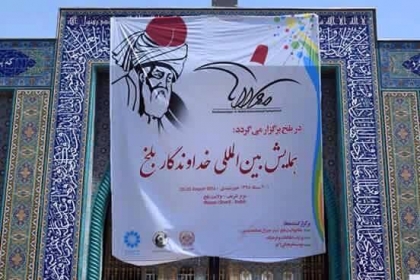 At the beginning of the symposium, deputy minister of administrative, financial and tourism for information and culture Zardasht Shams read out the message of President Mohammad Ashraf Ghani.

In a part of his message, the country’s President said, “I am happy that the symposium of the country’s great poet Mawlana Jalaluddin Mohammad Balkhi is held in a place where he was born and spent his childhood.

Hazrat Mawlana is not only an honor for Afghanistan but also for the whole Islamic world and humanity.”

In his message, President Ghani added the seminar is a good opportunity to review the life, work and thoughts of a great human and get something for solution of today’s problems.

The country’s President hoped that knowledgeable figures and teachers participating in the symposium would make effort to introduce art and thoughts of Mawlana and highly make use of them.

In opening ceremony of the seminar, Afghanistan cultural attaché to Tehran and director and coordinator of the seminar Mohammad Afsar Rahbin spoke related to works of commission tasked for holding the seminar during the past two months.

Afterwards, deputy minister of publication affairs for information and culture Associate Prof. Sayeda Mojgan Mostafavi by praising holders of the gathering expressed hope that the seminar would be a good facilitator for regional convergence and research related to works, thoughts and personality of the great poet.

Deputy Minister of publication affairs for information and culture also asserted that Mawlana had been an honor for humanity during the past history and his work Mathnavi Manavi was one of his unprecedented works.

At the end, the results of contest of poem read out in the seminar were declared and three top poets were granted prizes.