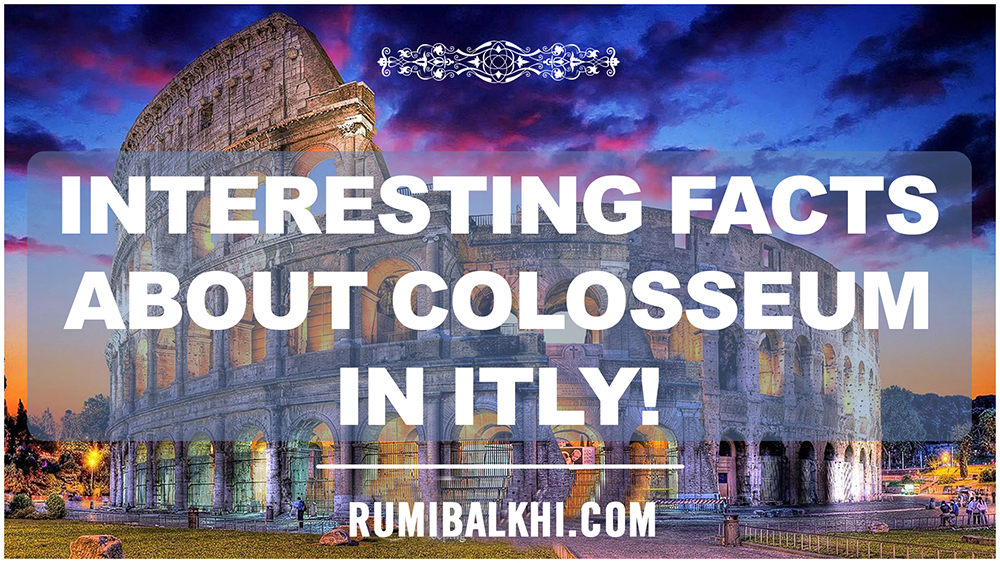 Colosseum:
The Colosseum is an amphitheater in the center of the city Rome, in Italy. It is also known as the Flavian Amphitheater. It is the largest amphitheater in the world and considered to be one of the greatest Roman architecture and engineering works. It was used for a variety of events and could hold 50,000 people. Earthquakes and stone robbers left it in ruins, but part of it still stands today.

Interesting Colosseum Facts:
It is also known as the Flavian Amphitheater because it was built during the Flavian dynasty. It got the name Colosseum because of a statue that was located alongside the amphitheater called ‘the colossus of Nero’.

Construction began in 72 AD under the emperor Vespasian.

Titus, Vespasian’s son and successor completed the construction in 81 AD. It took only 9 years to build. Even today, construction of a stadium that size would be difficult to build in only 9 years
It took 60,000 Jewish slaves to build the Colosseum. It was built of stone and concrete.

Domitian, Vespasian’s youngest son, made modifications to the amphitheatre during his reign from 81-96 AD. He built underground tunnels to hold slaves and animals. He also built a gallery to the top for additional seating.

Several different events were held in the Colosseum including gladiator contests, mock battles and animal hunts, and dramas that were based on Classical mythology. If they held a mock sea battle they flooded the Colosseum with water.

There were also re-enactments of famous battles and executions held in the amphitheater.
The amphitheater was used for entertainment for 390 years. During this time more than 400,000 people died inside the Colosseum. It’s also estimated that about 1,000,000 animals died in the Colosseum as well.

Admission and food was free to the ancient Romans who attended the events held there. It’s not likely that hot dogs and cold beer were served there like in the stadiums of today.

Some of the free food must have included fruit because fruit trees often grew in the Colosseum. It doesn’t sound like the Romans had discovered garbage cans yet. Or perhaps the spectators chose to throw their fruit at those in the center of the Colosseum if they were unhappy with the performance!

Some of the events and games that were held in the Colosseum lasted for up to 100 days.
They Romans had the earliest form of a Sky dome. If it rained they stretched a red canvas over the entire Colosseum.

In the early medieval era it was no longer used for entertainment purposes. Eventually it was used for workshops, housing, religious quarters, a quarry, a fortress and even as a Christian shrine.
After the Colosseum was partially destroyed by the earthquake, some of the fallen pieces were used to build St Peter’s Basilica.

It is one of the most popular Roman tourist attractions today.

Ray Charles, Paul McCartney, Billy Joel and Elton John have all performed concerts at the Colosseum.

The Colosseum has become a symbol against capital punishment. The death penalty was abolished in Italy in 1948. Today, any time anyone in the world has their sentence of death commuted (overturned) or they are released, the lights in the night time illumination of the Colosseum change from white to gold. This color change also occurs whenever a jurisdiction abolishes the death penalty as well.