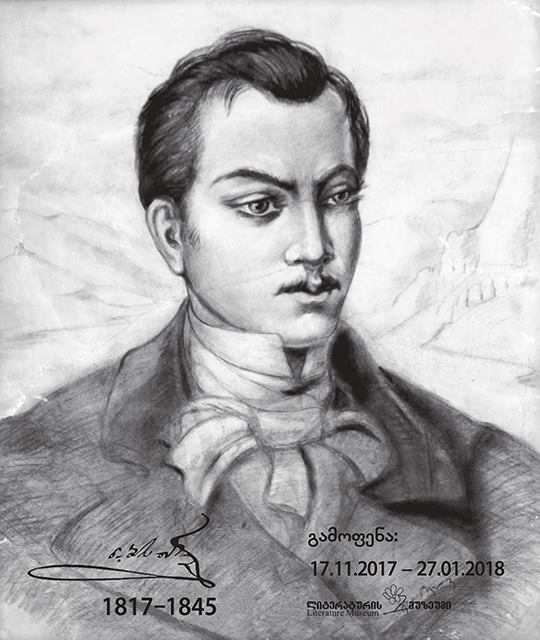 Nikoloz “Tato” Baratashvili was a Georgian poet. He was one of the first Georgians to marry a modern nationalism with European Romanticism and to introduce “Europeanism” into Georgian literature. Despite his early death and a tiny literary heritage of fewer than forty short lyrics, one extended poem, and a few private letters, Baratashvili is considered to be the high point of Georgian Romanticism. He was referred as the “Georgian Byron”.

Nikoloz Baratashvili, affectionately known as Tato, was born in Tiflis (Tbilisi), Georgia’s capital, which was then a principal city of Russian Transcaucasia. His father, Prince Meliton Baratashvili (1795–1860), was an impoverished nobleman working for the Russian administration. His mother, Ephemia Orbeliani (1801–1849), was a sister of the Georgian poet and general Prince Grigol Orbeliani and a scion of the penultimate Georgian king Erekle II. Baratashvili graduated, in 1835, from a Tiflis gymnasium for nobility, where he was tutored by Solomon Dodashvili, a Georgian patriot and liberal philosopher. The tragic quality of Baratashvili’s poetry was determined by his traumatic personal life as well as the contemporary political situation in his homeland. The failure of the 1832 anti-Russian conspiracy of Georgian nobles, with which Baratashvili was a schoolboy sympathizer, forced many conspirators to see the independent past as irremediably lost and to reconcile themselves with the Russian autocracy, transforming their laments for the lost past and the fall of the native dynasty into Romanticist poetry. Shortage of money prevented Baratashvili from continuing his studies in Russian universities, while an early physical injury – his lameness – did not allow him to enter military service as he wished. Eventually, Baratashvili had to enter the Russian bureaucratic service and serve as an ordinary clerk in the disease-ridden Azerbaijani town of Ganja. The love of his life, Princess Ekaterine Chavchavadze, rejected him and married David Dadiani, Prince of Mingrelia.

Baratashvili died of malaria in Ganja, unmourned and unpublished, at the age of 27. Baratashvili’s influence was long delayed, but as the next generation of Georgian literati rediscovered his lyrics, he was posthumously published, between 1861 and 1876, and idolized. Baratashvili’s reinterment from Ganja to Tbilisi in 1893 turned into a national celebration. Since 1938, his remains have lain in the Mtatsminda Pantheon in Tbilisi.

A key insight into the weltanschauung of Baratashvili can be found in his historical poem Fate of Georgia (1839), an inspiring and articulate lament for Georgia’s latest misfortunates. This poem, written by Baratashvili at the age of 22, is based on a real historical event: the 1795 ruining of Tbilisi by the Persian ruler Mohammad Khan Qajar, which forced the disappointed Georgian king Erekle II to relegate his country’s security onto the Russian Empire. However, national problems considered in this work are viewed with a modern approach; the poem considers not only Georgia’s past, but also its future in the aftermath of the failed revolt of 1832. In this poem, Baratashvili reproduces the debate of Erekle II with his chancellor, Solomon Lionidze, who opposes the union with Russia and thinks that this will result in the loss of Georgia’s national identity. Lionidze’s wife asks her husband, in a lament that became familiar to all literate Georgians: “What pleasure does the tender nightingale receive from honor if it is in a cage?” The sympathies of the poet and reader both fall on Solomon’s side, but the objectively rational decision of the king prevails.

During his short creative life (1833–45) Baratashvili developed difficult concepts of art and ideas. In the words of the British scholar Donald Rayfield, Baratashvili “evolved a language all his own, obscure but sonorous, laconically modern, sometimes splendidly medieval, with pseudo-archaisms.”