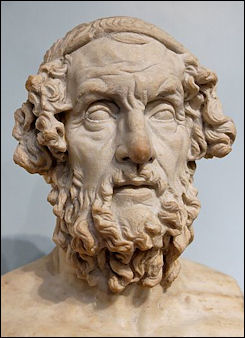 Homer is the name ascribed by the ancient Greeks to the legendary author of the Iliad and the Odyssey, two epic poems which are the central works of ancient Greek literature. The Iliad is set during the Trojan War, the ten-year siege of the city of Troy by a coalition of Greek states. It focuses on a quarrel between King Agamemnon and the warrior Achilles lasting a few weeks during the last year of the war. The Odyssey focuses on the journey home of Odysseus, king of Ithaca, after the fall of Troy.

Many accounts of Homer’s life circulated in classical antiquity, the most widespread being that he was a blind bard from Ionia, a region of central coastal Anatolia in present-day Turkey. Modern scholars consider them legends.

The Homeric Question—concerning by whom, when, where and under what circumstances the Iliad and Odyssey were composed—continues to be debated. Broadly speaking, modern scholarly opinion falls into two groups. One holds that most of the Iliad and (according to some) the Odyssey are the works of a single poet of genius. The other considers the Homeric poems to be the result of a process of working and re-working by many contributors, and that “Homer” is best seen as a label for an entire tradition.

It is generally accepted that the poems were composed at some point around the late 8th or early 7th century BC. The poems are in Homeric Greek, also known as Epic Greek, a literary language which shows a mixture of features of the Ionic and Aeolic dialects from different centuries; the predominant influence is Eastern Ionic. Most researchers believe that the poems were originally transmitted orally.

From antiquity until the present day, the influence of the Homeric epics on Western civilization has been great, inspiring many of its most famous works of literature, music, art and film.[9] The Homeric epics were the greatest influence on ancient Greek culture and education; to Plato, Homer was simply the one who “has taught Greece” – ten Hellada pepaideuken

life
Although very little is known about the life of Greek poet Homer, credited with being the first to write down the epic stories of The Iliad and The Odyssey, the impact of his tales continues to reverberate through Western culture.

The Greek poet Homer was born sometime between the 12th and 8th centuries BC, possibly somewhere on the coast of Asia Minor. He is famous for the epic poems The Iliad and The Odyssey, which have had an enormous effect on Western culture, but very little is known about their alleged author.

The Mystery of Homer
Homer is a mystery. The Greek epic poet credited with the enduring epic tales of The Iliad and The Odyssey is an enigma insofar as actual facts of his life go. Some scholars believe him to be one man; others think these iconic stories were created by a group. A variation on the group idea stems from the fact that storytelling was an oral tradition and Homer compiled the stories, then recited them to memory.

Homer’s style, whoever he was, falls more in the category of minstrel poet or balladeer, as opposed to a cultivated poet who is the product of a fervent literary moment, such as a Virgil or a Shakespeare. The stories have repetitive elements, almost like a chorus or refrain, which suggests a musical element. However, Homer’s works are designated as epic rather than lyric poetry, which was originally recited with lyre in hand, much in the same vein as spoken-word performances.

All this speculation about who he was has inevitably led to what is known as the Homeric Question—whether he actually existed at all. This is often considered to be the greatest literary mystery.

When He Was Born
Much speculation surrounds when Homer was born, because of the dearth of real information about him. Guesses at his birth date range from 750 BC all the way back to 1200 BC, the latter because The Iliad encompasses the story of the Trojan War, so some scholars have thought it fit to put the poet and chronicler nearer to the time of that actual event. But others believe the poetic style of his work indicates a much later period. Greek historian Herodotus (c. 484–425 BC), often called the father of history, placed Homer several centuries before himself, around 850 BC.

Part of the problem is that Homer lived before a chronological dating system was in place. The Olympic Games of classical Greece marked an epoch, with 776 BC as a starting point by which to measure out four-year periods for the event. In short, it is difficult to give someone a birth date when he was born before there was a calendar.

Where He Was Born
Once again, the exact location of Homer’s birth cannot be pinpointed, although that doesn’t stop scholars from trying. It has been identified as Ionia, Smyrna or, at any rate, on the coast of Asia Minor or the island of Chios. But seven cities lay claim to Homer as their native son.

There is some basis for some of these claims, however. The dialect that The Iliad and The Odyssey are written in is considered Asiatic Greek, specifically Ionic. That fact, paired with frequent mentions of local phenomena such as strong winds blowing from the northwest from the direction of Thrace, suggests, scholars feel, a familiarity with that region that could only mean Homer came from there.

The dialect helps narrow down his lifespan by coinciding it with the development and usage of language in general, but The Iliad and The Odyssey were so popular that this particular dialect became the norm for much of Greek literature going forward.

Works attributed to Homer
Today only the Iliad and Odyssey are associated with the name ‘Homer’. In antiquity, a very large number of other works were sometimes attributed to him, including the Homeric Hymns, the Contest of Homer and Hesiod, the Little Iliad, the Nostoi, the Thebaid, the Cypria, the Epigoni, the comic mini-epic Batrachomyomachia (“The Frog-Mouse War”), the Margites, the Capture of Oechalia, and the Phocais. These claims are not considered authentic today and were by no means universally accepted in the ancient world. As with the multitude of legends surrounding Homer’s life, they indicate little more than the centrality of Homer to ancient Greek culture.

The Iliad and The Odyssey
Homer’s two epic poems have become archetypal road maps in world mythology. The stories provide an important insight into early human society, and illustrate, in some aspects, how little has changed. Even if The Iliad itself seems unfamiliar, the story of the siege of Troy, the Trojan War and Paris’ kidnapping of Helen, the world’s most beautiful woman, are all familiar characters or scenarios. Some scholars insist that Homer was personally familiar with the plain of Troy, due to the geographical accuracy in the poem.

The Odyssey picks up after the fall of Troy. Further controversy about authorship springs from the differing styles of the two long narrative poems, indicating they were composed a century apart, while other historians claim only decades –the more formal structure of The Iliad is attributed to a poet at the height of his powers, whereas the more colloquial, novelistic approach in The Odyssey is attributed to an elderly Homer.

Homer enriched his descriptive story with liberal use of simile and metaphor, which has inspired a long path of writers behind him. His structuring device was to start in the middle–in medias res– and then fill in the missing information via remembrances.

The two narrative poems pop up throughout modern literature: Homer’s The Odyssey has parallels in James Joyce’s Ulysses, and his tale of Achilles in The Iliad is echoed in J.R.R. Tolkein’s The Fall of Gondolin. Even the Coen Brothers’ film O Brother, Where Art Thou? makes use of The Odyssey.

Homeric language
The Homeric epics are written in an artificial literary language or ‘Kunstsprache’ only used in epic hexameteric poetry. Homeric Greek shows features of multiple regional Greek dialects and periods, but is fundamentally based on Ionic Greek, in keeping with the tradition that Homer was from Ionia. Linguistic analysis suggests that the Iliad was composed slightly before the Odyssey, and that Homeric formulae preserve older features than other parts of the poems.

Legacy
“Plato tells us that in his time many believed that Homer was the educator of all Greece. Since then, Homer’s influence has spread far beyond the frontiers of Hellas [Greece]….” wrote Werner Jaeger in Paideia: The Ideals of Greek Culture. He was right. The Iliad and The Odyssey have provided not only seeds but fertilizer for almost all the other arts and sciences in Western culture. For the Greeks, Homer was a godfather of their national culture, chronicling its mythology and collective memory in rich rhythmic tales that have permeated the collective imagination.

Homer’s real life may remain a mystery, but the very real impact of his works continues to illuminate our world today.