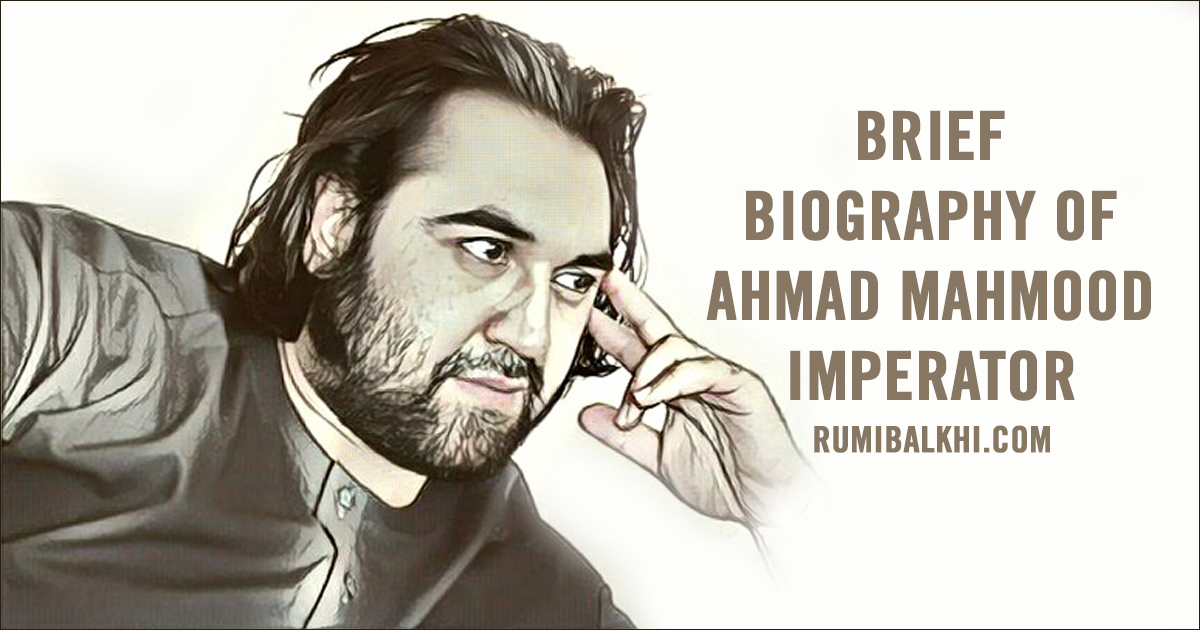 Ahmad Mahmood Imperator was born in 1984 in Kabul- Afghanistan. He is the son of Shir Ahmad Yawar Kangorchi and grandchild of Wakil Nizamuddin. Mahmood is descended to the poetry and litrature world generation by generation. His root in poetry reaches to Damullah Arbab Mahzoun who was a well known poet of his time in Badakhshan (A province in North East of Afghanistan).

Mahmoud was yet a child on his early years of his age that was sent to learn religious studies. Next, he got admission to attend the school. He went to Lycee Habibbia up to year three before he fled Kabul for Badakhshan. Due to worsening security situation in Kabul, Mahmoud had to flee the capital and head towards the historical district of Kashim in Badakhshan where he originally came from. He resided in Kangor Village of Kashim District and carried on with his primary and secondary school at Lycee Kashim up to year ten. It was when Kabul was safe again for Mahmoud to return and obtain his baccalaureate from Lycee Abdulhadi-e-dawi in high grades.

In 2004 Mahmoud succeeded to pass the exam kankor and get the admission to University of Kabul – Faculty of Medicine. As Mahmoud’s health condition became threatening, sadly, he had to stop his undergraduate studies. Despite the struggle, Mahmoud never gave up and grabbed every opportunity to achieve. He added to his general knowledge, made some research in poetry and litrature and more importantly, he undertook his higher education as a result of which he became an information technology engineer. It was then, that he discovered his aspirations of poetry.

In 2010 Mahmoud started saying poems. His first poem was in form of Masnawi (Poetry consisting of distiches riming between themselves, couplet poems) which was said in praise of Badakhshan and its Poets. Afterwards, he wrote poems in form of Mukhamas (Limerick). Most of his Mukhams poems reflect on Hazrat Abulmahani Bidil’s Ghazals (Sonnet). In addition to Masnawi and Mukhams, Imperator writes his poems in form of Ghazal, Musadas (Verse composed of six lines, hexameter) Rubahi (Quatrain verses) and Mustaszad (Echo verse). In poetry, Mahmoud is a follower of Bidil’s Style and School. However he challenges the style with a touch of modernity.

Imperator’s poems have vastly conquered the social media. Soon his collection of poems will be published and in access to the fans of Farsi Language Poetry and Literature.

It worth mentioning, that Imperator has done remarkable work in electronic design and calligraphy using his excellent IT skills. One of the examples of his work is double verse poems of Bidil which is written in different styles of Persian Fonts.