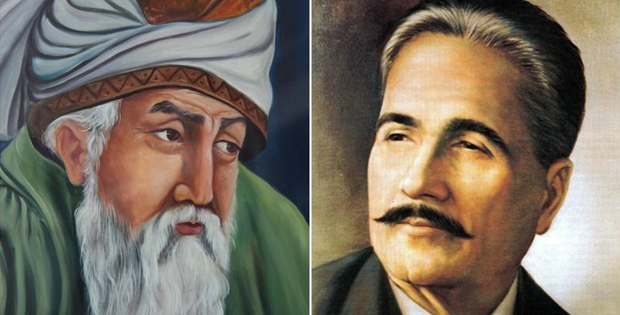 Rumi and Alama Iqbal belonged to a unique league of creative individuals who did not call themselves poets; such a league did not exist in western literature – Dr. Iftikhar Shafi

Iqbal really loved the Holy Prophet (peace be upon him). This can be known from his writings and through the recollections of those who visited him. They say whenever the Prophet would be discussed, Iqbal would feel deeply touched by it and tears would begin to flow from his eyes.

This was said by Dr Zeki Saritoprak, professor of Islamic Studies, department of theology and religious studies, John Carroll University, Ohio, while speaking at a seminar titled ‘Rumi and Iqbal — two great minds’ organised by the Greenwich University and the Rumi Forum on the university’s premises on Thursday.

On Iqbal, Dr Saritoprak said he really loved the Prophet which could be known from his writings and from those who visited him. He said those who visited him said whenever the Prophet would be discussed, it would deeply touch Iqbal and tears would begin to flow from his eyes. He said in Pyam-i-Mashriq Iqbal said he who cherished the love of Mustafa controlled everything in the seas and land. Quoting from Armaghan-i-Hijaz, he said his community possessed the heart but had no beloved. And who is the beloved, he asked and replied: the Prophet.

After his talk, responding to a question about why this aspect of Rumi did not get highlighted in the West, Dr Saritoprak said: “It’s now getting better.”

Dr Iftikhar Shafi, associate professor, department of English, University of Karachi, was the next speaker. Giving his own example that how he reached Rumi through Iqbal, he said he focused on the subject as to what brought the aesthetic and the religious (or ethical) together in the two poets’ works. He called it unique and astounding. He said they belonged to a unique league of creative individuals who did not call themselves poets. He claimed such a league did not exist in western literature. He said Rumi and Iqbal called themselves something else, and to explain that he quoted from different sources, including those taken from philosophical thought, suggesting where art ended something else began.

He also quoted Iqbal’s line ‘Meri nava-i-pareeshan ko shairi na samajh’ (Don’t misconstrue my concerned voice as poetry) to explain himself. He said Iqbal was important to us because he took us to Rumi.

After his speech, quite a few questions were put to Dr Shafi. One of them was to do with the definition of tasawwuff, to which he said it needed a detailed answer and for that the questioner could get in touch with him later.

TV anchor and journalist Yasir Qazi was the last speaker of the evening. He started off by narrating one of his dreams which, apart from the two poets, also featured the great Sufi poet Shah Abdul Latif Bhitai.

Earlier, Dr Sait Celik, director of the Rumi Forum, delivered a brief speech beginning by the famous Rumi verse, “I’m a mountain. You call. I echo.” He said Rumi was a great messenger, who used the language of love. He said it had been seven centuries since the poet passed away but his verses penetrated centuries to reach our time. He said his voice was waiting for the right person to convey his message and then came Iqbal to convey that.

Uruj Perwaiz introduced the Rumi Forum to the audience. She said it was founded in 1999 in the US and had chapters in different cities of Pakistan. She said the aim of the forum was to promote peace, love and harmony.