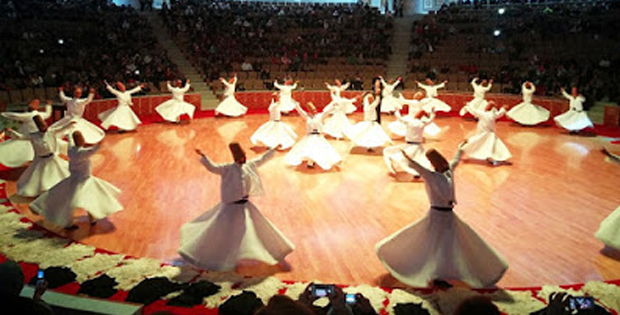 “When we are dead, seek not our tomb in the earth, but find it in the hearts of men.”

Rumi’s poetry continues to touch hearts across countries and cultures more than seven centuries after his death. A Muslim theologian who turned to mysticism, he is regarded as the finest Persian poet of all time and among the greatest in the sufi tradition.

Born in Balkh (Afghanistan), Rumi lived most of his life in Konya (Turkey), where he is buried. December 17, 2014 marked Rumi’s 741st death anniversary and thanks to two Turkish friends who organised the trip, I was able to visit Konya that day to remember Rumi.

When our short flight from Istanbul landed in Konya, the temperature was hovering around zero degrees Celsius. But, despite the cold, the Mevlana Museum had a warm atmosphere, and without the usual pressures of security and formality. (In Turkey, Rumi is known as Mevlana) Women clearly outnumbered men, many of them wearing colorful head scarves.

The first point of attraction for everyone at the museum was Rumi’s tomb. The queue moved rather slowly past that corner and the cameras kept clicking.

It was a touching experience. It had to be. The mystic himself is a mystery for many of his admirers, who only know him from his popular verses, often translations from Persian.

Visiting his museum, seeing his tomb and articles of personal use attributed to him demystify Rumi’s existence, making a tangible connection in an intangible relationship.

Anyone who knows Rumi knows that his way is the love of God. A desire for connecting with God and humility are an integral part of the way of love:

Knock, And He’ll open the door
Vanish, And He’ll make you shine like the sun
Fall, And He’ll raise you to the heavens
Become nothing, And He’ll turn you into everything.

Although most of Rumi’s works are in Persian and more than 700 years old, his international appeal may be rising. These days, websites and social media are also spreading Rumi’s poetry. For instance, on Twitter, if you search for #Rumi, you would find dedicated accounts tweeting his verses every day.
I was more surprised, however, to discover that Rumi is one of the bestselling poets in the US. The books on Rumi’s poetry by Coleman Barks, an American poet, seem particularly popular.

One of the better documentaries about the mystic, Rumi: Poet of the Heart, released in 1998, is an initiative from the US and it also features Coleman Barks. I found that a collection of music and recitation inspired by Rumi, A Gift of Love (another initiative by his admirers in the US), has quietly amassed more than a million views on YouTube.

As I walked out of the Mevlana Museum thinking about Rumi’s message of love, I couldn’t help noticing the screaming headlines on the Turkish newspapers on a newsstand. The photos alongside the headlines left little to imagination; they were about the massacre of school children in Peshawar by the Taliban on 16 Dec.

Those headlines made for a painful sight. Standing outside the Mevlana Museum seeing the photographs of the Peshawar attack, I wondered how could the Taliban and Rumi claim allegiance to the same religion – the contrast could not be starker!

The influence of Rumi runs deep in subcontinent. Among his fond admirers is the great Allama Iqbal.
The inspiration that Iqbal derived from Rumi is reflected in his work Pir o Mureed in Bal-i-Jibril (1935). It is a dialogue between Iqbal and Rumi written in both Urdu and Persian, and in one of the verses, Iqbal (mureed) says to Rumi (pir),

“You, the leader of the lovers of God; I do remember your exalted words.”

Sufi tradition and Rumi’s poetry continue to find expression in Pakistani music. If you have heard the popular qawwali Allah Hu by Nusrat Fateh Ali Khan, you may recall that it also begins with a reference to Shams Tabreez, the wandering mystic who is credited with putting Rumi on the path of mysticism.

A number of songs produced by Coke Studio in Pakistan and India in recent years are steeped in the sufi tradition.

Interestingly, the lyrics of Bullah Ki Jana by the Punjabi sufi poet Bulleh Shah (1680-1757), made popular by the singer Rabbi Shargil in a song by the same name, seem inspired by verses of Rumi in Persian.

Rumi’s tradition is closely associated with the whirling dervish. One explanation of this association is that Rumi used to move in a similar motion as he composed and recited his verses, which were then written down by his students. Attending the sema (deep listening) or the performance of the whirling dervishes at the beautiful arena of the Mevlana Cultural Center was another touching experience.

The Center had the same relaxed atmosphere as the Mevlana Museum and once again women outnumbered men. When the dervishes in their white tunics slowly stepped in, the hall went quiet in respect and anticipation. What followed was a unique and enchanting performance full of symbolism.

Little wonder that UNESCO has included the Mevlevi Sema Ceremony in the Masterpieces of the Oral and Intangible Heritage of Humanity. A booklet given to the attendees by the organisers explained that the whirling of the dervishes is the turning of a human being towards truth, elevating his mind with love, and abandoning his ego. In fact, the long hat worn by the dervish represents the tombstone of his ego.

You can catch a glimpse of the performance in Konya with a short video clip that I managed to capture through my mobile phone:

It is not unusual for an idea, once it has gained popularity, to be used for unintended purposes. Rumi’s poetry and tradition are no exception. The order of Mevlena, established after Rumi by his sons and followers, has at times found itself in political confrontations, and was outlawed in 1925 by the secular powers. The traditional sema is said to have been modified to suit the tourists, diluting its religious content.

Sema’s commercial use is reportedly increasing, degrading it from the message of mysticism to just another form of entertainment. Worst of all, the anachronism of trying to understand Rumi’s centuries old sufi Persian poetry using the modern Western context of English words such as love does more to mislead than enlighten the reader.

To be clear, sufism in Islam is not without its criticism. One such critique is by the towering contemporary scholar Javed Ahmad Ghamidi, delivered in his characteristic precise yet polite style.

It is difficult to reconcile sufism’s emotional appeal with its critique, but few admirers of Rumi would be familiar with these debates. What they would probably know is that Rumi’s way is the love of God, not of jurisprudence or politics. And love, as we all know, does not follow conventions.

As Rumi explains it in The Shepherd’s Prayer in Diwane Shams Tabreez:

“The religion of love is apart from all religions. The lovers of God have no religion but God alone.”