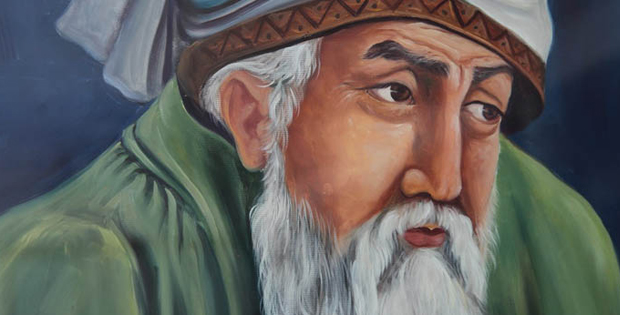 Maulana Jalaluddin Rumi was a 13th century Persian poet, an Islamic dervish and a Sufi mystic. He is regarded as one of the greatest spiritual masters and poetical intellects. Born in 1207 AD, he belonged to a family of learned theologians. He made use of everyday life’s circumstances to describe the spiritual world. Rumi’s poems have acquired immense popularity, especially among the Persian speakers of Afghanistan, Iran and Tajikistan. Numerous poems written by the great poet have been translated to different languages.

Childhood:
Jalaluddin Rumi was born on September 30, 1207, in Balkh (in present-day Afghanistan). His father, Bahaduddin Walad, was a theologian, jurist and a mystic, while his mother was Mumina Khatun. When Mongols invaded Central Asia, between 1215 and 1220, Rumi left Balkh with his family and a group of disciples. The migrating caravan traveled extensively in Muslim lands, including Baghdad, Damascus, Malatya, Erzincan, Sivas, Kayseri and Nigde. After performing pilgrimage in Mecca, they eventually settled in Konya, located in the present-day western Turkey. At that time, Rumi’s father was an Islamic theologian, a teacher and a preacher.

Career:
Rumi was a disciple of Sayyed Burhan ud-Din Muhaqqiq Termazi, one of his father’s students. Under the guidance of Sayyed Termazi, he practiced Sufism and acquired a lot of knowledge about spiritual matters and secrets of the spirit world. After the demise of Bahaduddin, in 1231 AD, Rumi inherited his father’s position and became a prominent religious teacher. He preached in the mosques of Konya. By the time Rumi reached the age of 24, he had proven himself as a well-informed scholar in the field of religious science.

Turning Point Of Rumi’s Life:
Rumi was already a teacher and a theologian, when in 1244 AD he came across a wandering dervish named Shamsuddin of Tabriz. The meeting proved to be a turning point in his life. Shamsuddin and Rumi became very close friends. Shams went to Damascus, were he was allegedly killed by the students of Rumi who were resentful of their close relationship. Rumi expressed his love for Shamsuddin and grief at his death, through music, dance and poems.

For nearly ten years after meeting Shamsuddin, Rumi devoted himself in writing ghazals. He made a compilation of ghazals and named it Diwan-e-Kabir or Diwan-e Shams-e Tabrizi. Thereafter, Rumi encountered a goldsmith – Salaud-Din-e Zarkub – whom he made his companion. When Salaud-Din-e Zarkub died, Rumi befriended one of his favorite disciples named Hussam-e Chalabi. Rumi spent most of the later years of his life in Anatolia, where he finished six volumes of his masterwork, the Masnavi.

Popular Works:
Diwan-e Shams-e Tabrizi: Diwan-e Shams-e Tabrizi (or Diwan-e-Kabir) is one of the masterpieces of Rumi. It is a collection of ghazals named in the honor of dervish Shamsuddin, who was Rumi’s great friend and inspiration. It also contains an assortment of poems arranged according to the rhyming scheme. Diwan-e-Kabir has been written in ‘Dari’ dialect. It is regarded as one of the greatest works of Persian literature.
Mathnawi: Mathnawi is a compilation of six volumes of poetry, written in a didactic style. The poems are intended to inform, instruct as well as entertain the reader. It is believed that Rumi started the work of Mathnawi at the suggestion of his then companion, Husam al-Din Chalabin. Mathnawi attempts to explain the various facets of spiritual life.

Legacy:
Rumi’s popularity has gone beyond national and ethnic borders. He is considered to be one of the classical poets, by the speakers of Persian language in Iran, Afghanistan and Tajikistan. For many years, he had a great influence on Turkish literature. The popularity of his works inspired many artists, including Mohammad Reza Shajarian (Iran), Shahram Nazeri (Iran), Davood Azad (Iran) and Ustad Mohammad Hashem Cheshti (Afghanistan), to give classical interpretation for his poems. Rumi’s works have been translated to many languages across the world, including Russian, German, Urdu, Turkish, Arabic, French, Italian and Spanish.

Death:
Rumi departed from the world on 17th December 1273 AD, in Konya, within the Seljuk Empire’s territory (currently it’s within Turkey). He was buried beside his father in Konya. A tomb named Mevlana mausoleum was built in Konya, commemorating the great Sufi poet. It consists of a mosque, dervish living quarters and a dance hall. The sacred site is visited by his admirers coming from different parts of the world.