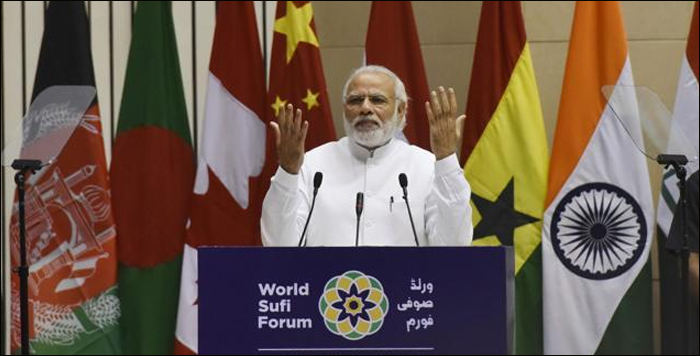 “Sufism reflected the universal human desire to go beyond the practice and precepts of religion for a deeper unity with the Almighty. And, in that spiritual and mystical enquiry, Sufis experienced the universal message of the Almighty: That perfection in human life is reflected in the qualities that are dear to God. That all are creations of God; and, that if we love God, we must also love all his creations. For the Sufis, therefore, service to God meant service to humanity.” Indian Prime Minster, Navendra Modi.

Whether his talk was politics or sincere admiration, Prime Minister Navendra Modi offered a beautiful 30 minute homage to Sufism at the World Sufi Forum in Delhi, March 17. The idea of Sufism as an antidote to violence and extremism has rippled through the collective psyche of humanity, a sign of the times. And as the traditional saying goes: The Sufi is the person of the moment (ibn al waqt).

Prime Minister Narendra Modi has praised Islam for its message of peace and harmony and described Sufism as one of its greatest contributions.

He said this while addressing a global audience on the opening day of the World Sufi Forum in New Delhi on Thursday.

Terrorism dominated the discussion at the three-day event in which Sufi scholars from around the world are taking part.

“Of the 99 names of Allah , none stand for force and violence and the first two names denote compassionate and merciful. Allah is Rahman and Raheem…Those who spread terror in the name of religion are anti-religious,” Modi said.

“When the spiritual love of Sufism, not the violent force of terrorism, flows across the border, this region will be the paradise on earth that Amir Khusrau spoke about,” Modi added, referring to the 13th century Sufi poet.