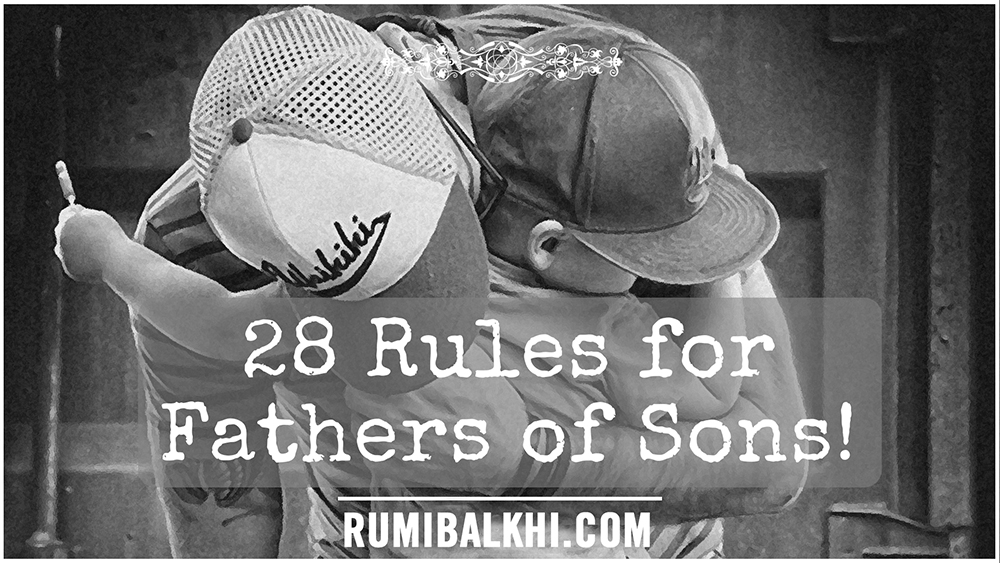 Every once in a while I come across a real gem on someone else’s blog that I fall in love with. Yesterday I somehow wandered onto a blog called Diapers & Daisies to a post written back in May called 28 Rules for Fathers of Sons. And while there are a couple things I’d maybe add to some of these, I couldn’t help but think her post was fantastic.

It did well, but I think it deserves a lot more love, and Sarah (who I’m quickly learning is a mom blogger worth following) was kind enough to let me share her post with all of you. I hope you enjoy it as much as I did! And when you’re done, be sure to go check her blog out.

1. Love his Mother. He will learn to love like you love, and hate like you hate. So choose love for both of you. Devote yourself to it. Love with your whole heart and express that love each and every day. Then, someday down the road, you will see the way he loves his own wife, and know that you played a part in that.

2. Let him drive. Every child remembers the first time they drove on daddy’s lap. For that one moment, he will believe that he is just. like. you.

4. Take him to a ball game. There is something about sharing a day of hot dogs, sunshine and baseball with your father.

5. Love with Bravery. Boys have this preconceived notion that they have to be tough. When he is young, he will express his love fully and innocently. As he grows, he will hide his feelings and wipe off kisses. Teach him to be a man who rubs them in instead. It takes courage for a man to show love: teach him to be courageous.

6. Talk about sex. Sometimes, boys need to know that all men are created equal.

7. Teach him to be a man’s man. Show him how to be brave and tough around the guys. Then, remind him on the ride home that it is okay to cry.

8. Share secrets together. Communicate. Talk. Talk about anything. Let him tell you about girls, friends, school. Listen. Ask questions. Share dreams, hopes, concerns. He is not only your son, you are not only his father. Be his friend too.

9. Teach him manners. Because sometimes you have to be his father, not just his friend. The world is a happier place when made up of polite words and smiles.

10. Teach him when to stand-up and when to walk away. He should know that he doesn’t have to throw punches to prove he is right. He may not always be right. Make sure he knows how to demand respect- he is worthy of it. It does not mean he has to fight back with fists or words, because sometimes you say more with silence.

11. Teach him to choose his battles. Make sure he knows which battles are worth fighting- like for family or his favorite baseball team. Remind him that people can be mean and nasty because of jealousy, or other personal reasons. Help him to understand when to shut his mouth and walk-away. Teach him to be the bigger better person.

12. Let him dance in tighty whiteys. Dance alongside him in yours. Teach him that there are moments when it is okay to be absolutely ridiculous.

13. Share music. Introduce him to the classics and learn the words to the not-so-classics. Create a rock band with wooden instruments, share your earphones, and blast Pink Floyd in the car. Create a soundtrack to your lives together.

14. Let him win. Sometimes he needs to know that big things are possible.

16. Father him. Being a father—to him—is undoubtedly one of your greatest accomplishments. Share with him the joys of fatherhood, so one day he will want to be a father too. Remind him over and over again with words and kisses that no one will ever love him like you love him.

17. Listen to him now. If you don’t listen to the little things now, he won’t share the big things later.

18. Let him try on your shoes. Even if they are old and smelly. Let him slip his little feet in and watch him as he hopes like hell that someday he can fill them. He will fill them.

19. Give him bear hugs. The kind that squeezes his insides and make him giggle. The kind of hug only a daddy can give.

20. Give him baths. Because Mom can’t do everything damnit.

21. Teach him how to pee standing up. Let him pee outside- such is the joy of being a man. Mom cannot teach this talent, so someone has to.

22. Know the answers. He will assume you do. If you don’t know them, pretend you do and look them up later.

23. Toss him around. Because little boys love seeing the strength of their father. Throw him up in the air, so that he knows you will always be there to catch him on his way down.

24. Ask his mother. He will come to you with questions that he won’t always want to ask his mother, about girls and about love. Ask her anyway, she will know the answers.

25. Love him like you would love a daughter. Little girls are not the only ones who need hugs and kisses. Love is the color yellow of emotions. It is both happy and gender neutral.

26. Grow a big belly. Because every child should get the chance to rest their head on the absolute softest pillow ever. Daddy’s belly is the best place to land.

27. Don’t say, do. American inventor Charles F. Kettering once said, “every father should remember that one day his son will follow his example instead of his advice.” Be a good one.

28. Be his hero. You are anyway. To him, you have the strength of Batman, the speed of Spiderman and the brain of Ironman. Don’t disappointment. Prove to him that Daddy’s are the biggest heroes of all. Only Daddy’s can save the day.