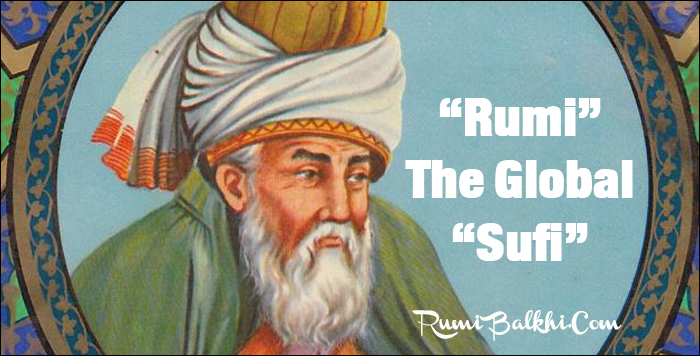 On the birth anniversary of Rumi, here’s looking at this Muslim mystic’s reception on Western shores.

I am no Christian, no Jew, no Magician, no Musulman, / Not of the east, Not of the west, not of the land, not of the sea …/… my place placeless, my trace traceless.

There is an unmistakable universality in Rumi’s poetry, which reflects how he perceived the world and humanity. Given the world he lived in, he tenaciously refused to be pinned down to any narrow precept of religious definition. Even in his own time, he had admirers from other religious faiths. It is little wonder that, bridging a chasm of 700 years, his poetry still tinkles like wind chimes in the most unlikely places.

How hard was it for him to break away from the shackles of his times? Perhaps a better question would be how awkward it was for his world to come to terms with a world view that was maverick to say the least. Take, for instance, his frequent allusions to wine, much to the disconcertment of the priesthood.

Whosoever saw such drunkards? / Barrels broken open, the ground and starry/ceiling soaked. / And look, / this full glass in my hand.

From time immemorial, the conversion of grapes to sparkling wine has been the most spectacular of transformations, and Rumi celebrated human transformation through the metaphor of wine.

Crossing boundaries:
Rumi was once described as the most popular poet in the U.S. and his works have been best-sellers for a while now. It’s intriguing that a 13th century Muslim mystic resonates with personalities as diverse as Hegel and Marx, Madonna and Donna Karan, and is consumed eagerly in yoga centres, karma cafes and coffee shops.

Colman Barks’ 2001 translation, of course, has much to do with this surge in popularity, with The Soul of Rumi selling half a million copies, still counting. It followed the trend set by the HarperCollins volume published in 1995, The Essential Rumi, which became the most successful poetry book published in the West that decade, with over 250,000 copies printed.

However, Rumi’s influence over the West began much earlier, with German poet Friedrich Rückert’s freewheeling translations in the mid-1800s. In fact, Rückert’s book Ghaselen influenced a whole new German verse form, the German ghazal: Der Orient ist abgetan/Nun seht die Form als unser a. (The Orient is laid aside/ Note the form as ours now.)

Seven centuries ago, when Jalaluddin Rumi was born on September 30, 1207, in Balkh, Afghanistan, Sufism was already widespread. But what Rumi seems to have done is to take Sufism and blend it with music, dance and love to an extent where it left religion and mysticism behind and took on a far-reaching spiritual resonance that crossed the boundaries of culture and geography with ease. It was a message that allowed its undeniable religious origins to be subsumed by secular interpretations.

Birth of a masterpiece:
It is the early years of the 13th century. The setting would have charmed a cinematographer; lush vineyards stretching right up to the toes of the Anatolian hills. Rumi and his beloved scribe Husam Chalebi are wandering around just outside their hometown of Konya in Turkey.

Husam suggests the Master begin work on a new literary composition, something in the mathnavi (couplet) tradition. Rumi, twinkle in his eyes, takes out a piece of paper from the fold of his turban and hands it over to Husam. It has a couplet that Rumi has composed just that morning.

“There must be more,” exclaims Husam, hands trembling with excitement.

“If you scribe for me, I shall continue,” replies Rumi.

Thus began 12 years of an engrossing period. Rumi never took the pen. He would recite, wherever he was, trudging the winding tracks outside Konya, immersed in Turkish baths. Sometimes, Rumi would recite continuously, over days and nights. On other occasions, he could be silent even for two long years.

This long poetic ecstasy produced Mathnavi-i-Maanavi, Rumi’s magnum opus. It was here in Konya that Rumi bloomed. As Sufi scholar Idries Shah puts it, “Rumi had the uncomfortable Sufi habit of excelling in literary and poetic ability beyond all his contemporaries.”

It was in Konya’s bazaar that Rumi met Shams ud-Din, and instantly and passionately made him his friend and mentor. Under Shams’ guidance, Rumi flowered as poet and mystic. But Shams’ mysterious disappearance (some say he was murdered by Rumi’s jealous friends) devastated Rumi. The grief and the subsequent awakening produced a collection of odes and quatrains titled The Diwan of Shams of Tabriz, one of Rumi’s definitive works.

Perhaps reminiscent of his divinely drunken days with Shams, Rumi introduced dances and whirling movements among his disciples, where the body and mind whirl in surrender seeking the ultimate union. Thus was born the Order of the Whirling Dervish.

Today, his body of work has taken on the mantle of being a sort of global symbol of non-denominational spirituality, somewhat similar to the popularity that Omar Khayyam’s couplets once enjoyed, and that the works of Kahlil Gibran or Paulo Coelho still do. Rumi enjoys an easy pop philosophy acceptance, one that can be impressed on calendars and coffee mugs, reminiscent of the partiality for Indian ‘gurus’ and Zen aphorisms that the West has displayed equally enthusiastically.

But while one might cavil at this too-facile reception, one cannot deny the unmistakeable influence he exerts. In a world getting violently divided along inflexible lines, returning to Rumi is surely a preferred antidote. And it’s happening, slowly but surely.

As he wrote: My name and my words will be told/among lovers, centuries after my death.

By: ASHIS DUTTA
Source: The Hindu